This Week in WordPress #139

This Week in WordPress #139 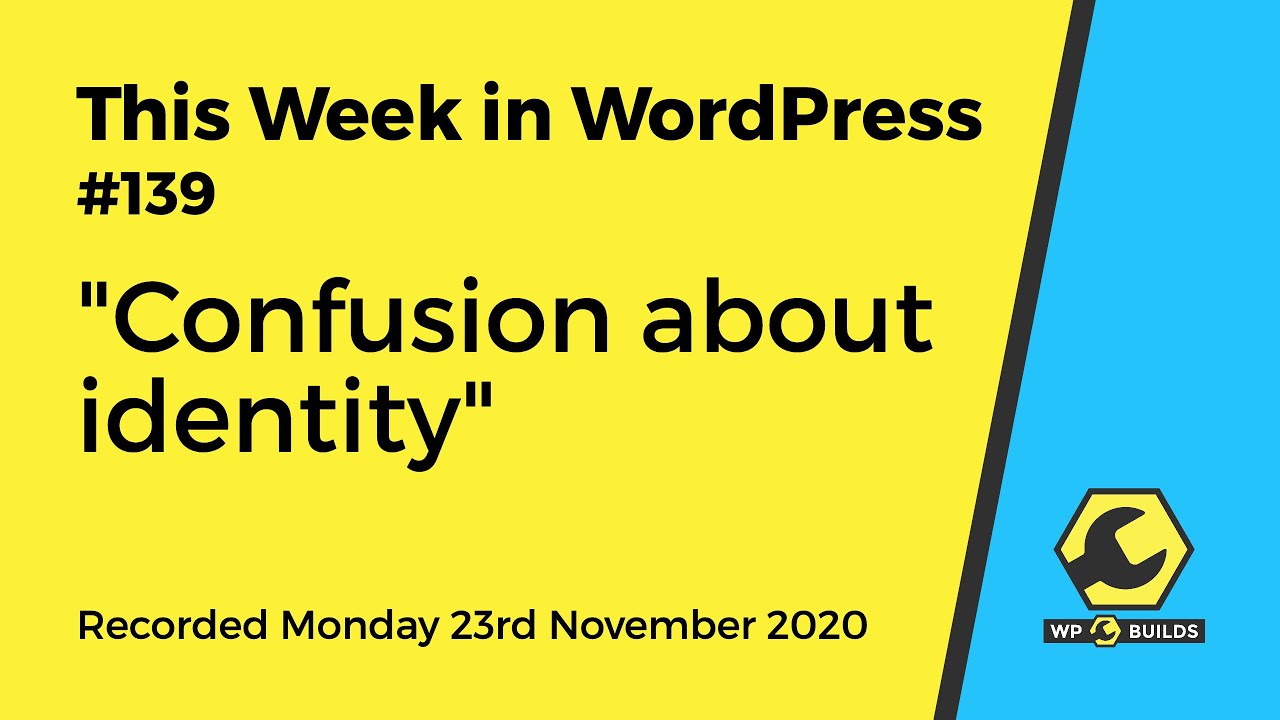 You can find the Newsletter here which has all the links mentioned in this episode:
https://news.wpbuilds.com/issues/139

WordPress 5.6 Release Candidate
“The final release of 2020 continues the annual tradition of a new default theme that is custom built to showcase the new features and functionality of the software. Continued progress on the block editor is especially clear in this release, which brings more blocks to more places, and fewer clicks to implement your layouts.”

Gutenberg 9.4 Introduces Button Width Selector and Typography Controls for List Block
“Gutenberg 9.4.0 was released this week with many small improvements to existing features, while work on full site editing continues. This release will not be included in the upcoming WordPress 5.6 release but those who are using the Gutenberg plugin will have access to the improvements right away.”

WordPress.com Gives Conservative Treehouse the Boot, Citing TOS Violations
“The Conservative Treehouse, a political publication hosted on WordPress.com for the past 10 years, is moving to a new host after receiving a notice from Automattic regarding violations of its Terms of Service. The site’s owner, previously identified as Florida resident Mark Bradman, claims to have a 500,000 – 1,000,000 unique readers per day. He has been ordered to find a new hosting provider and migrate the site away from WordPress.com by December 2, 2020…”

Should WordPress Notify Users of Plugin Ownership Changes?
“WordPress should have some mechanism for notifying users of changes of ownership. The more transparency that exists in the ecosystem, the healthier it is for all…”

Proposal to Create an Expanded View or Overlay for the Block Patterns Inserter
“Viewing a lot of patterns in the small inserter panel does not work too well,” he [Paal Joachim Romdahl] wrote in the GitHub ticket. “It gets tiring needing to scroll one pattern at a time. Having a larger view will help the user to compare multiple patterns at once.”

AI Generated Paintings
AI created artwork. The world is surely about to come to an end!

it's totally indistinguishable to my, look at that. W, sorry, again, if you're listening to this, I apologize. The it's called art AI gallery.com. And basically you just go to art, AI gallery.com. You'll see it. It just. Totally an utterly indistinguishable to my eye from what an artists would produce.
And I'm sorry if you're an artist and you find this offensive, but it's just fabulous. And honestly, I imagine most people's experience with art isn't that they want to spend a long time in a gallery. I imagine this is just for people who want to put something on the wall. That's a bit of a talking point from now, or fill in a bit of a gap.

Bernhard Gronau: [01:09:50] With art, it's always the discussion. I feel it's it's talking about the image that is created or are we talking about the craftsmanship that's needed to make the image by hand?
Paul Lacey: [01:10:05] Because
Nathan Wrigley: [01:10:05] I know the, no, but you can imagine the algorithm for this will just get better based upon what sells.
It's okay. A ton of those sold let's make art more like that until eventually we get the most bit, the most bland on interesting AI art, which is just exactly what everybody wants. I think, I think the computer has gone a bit wrong here. Oh no, it's a hurricane. Okay. Fine.
Paul Lacey: [01:10:29] It has gone wrong in some of them that has the night, which is
Nathan Wrigley: [01:10:31] quite formal, but you can tell
Bernhard Gronau: [01:10:34] it's more than that's perfectly fine.
Paul Lacey: [01:10:39] I can write novels and screenplays and stuff now currently. maybe we can have the AI. Art critic that goes on the website and is trying to describe and pointing out what's in this picture and save it and then compare that to an actual art critic and see which one makes the most sense to the average user.
Jan Koch: [01:11:02] Isn't there also an AI that Google demonstrated recently that booked appointments for you by looking into your calendar. And they were calling people like they would call your salon or beauty salon, whatever, and do an appointment with you. And those people wouldn't recognize that
Nathan Wrigley: [01:11:22] they had to. I think it was California law had to be amended such that it had to announce itself.
As an AI because yeah, they did it live on stage at Google IO. I think it was in 2019 and yeah, sure enough, it called up a restaurant and made a reservation and inserted all sorts of human mannerisms completely deliberately. Ah, yeah. Yeah. Hold on a minute. just nonsense stuff that we all do it wasn't perfect.
They had to deliberately put the imperfections in, Yeah, the good thing about humans is we've got the imperfections already. Ha computers, that's it. You have to think about imperfections. the next big thing, of course, as Mac says, is, computers, designing websites. Whereas this isn't that far away, honestly, I think give it 10 years and something will come along, which enables us to speak our website.
Give me a nice website. 10 seconds later. Is that any good? Yeah, that's fine. Okay. Let's go with that. Totally. That's it. That's what it'll be pop
Bernhard Gronau: [01:12:27] makes the local more
Nathan Wrigley: [01:12:28] public, what's annoying Paul though, is that the computer won't argue? The computer will go. Yeah. Yeah.
Yeah.
Bernhard Gronau: [01:12:43] sorry. Can't do that. Yeah.
Nathan Wrigley: [01:12:45] that was my final piece for the week. I appreciate, I appreciate all the involvement from the three people with me today as always Paul Lacey and I'm on each and every week. I don't know why he puts up with us, but he does. Thank you, Paul. Very much appreciated and Bernard.
And young cock. I don't know if you've got anything you want to add. We're trying to keep these bits of banter down to a minimum, but if you've got anything that you want to add about this week or something, feel free, go for it. That's a no, that's it. Big fat? No. Okay, perfect. In which case we'll end it, I'll ask you three, if you wouldn't mind just sticking on the line for a moment, but thanks for joining us.
We'll be back this time next week, 2:00 PM. UK time this week in WordPress, trying to hammer home that name so that it gets remembered. Cheers. Take it easy. Oh,
Jan Koch: [01:13:30] I.