This Week in WordPress #153

This Week in WordPress #153 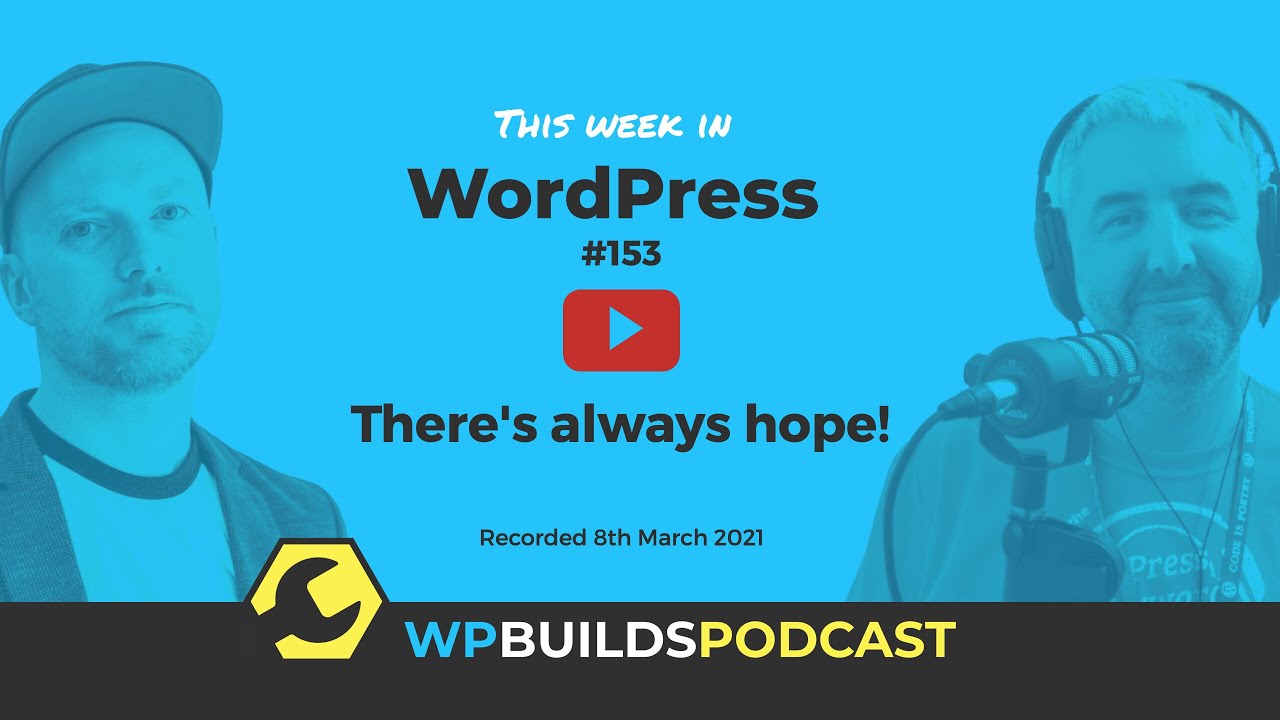 You can find the Newsletter here which has all the links mentioned in this episode:
https://news.wpbuilds.com/issues/153/

When It’s (Not?) Burnout

Nathan Wrigley: [00:00:00] It's time for this week in WordPress episode number 153 entitled. There's always hope it was recorded on Monday the 8th of March, 2021. I'm joined this week as always by my car host Paul Lacey, but also this week by a bigot hack and slightly later than expected Spencer foreman drops in about an hour into the show.
We talk a lot about a particular article, the very first one, which consumes most of the show is an article all about elementor raising eyebrows with them. The Google ads that they've been producing recently, we then go on to talk about money or camels editor plus, and the way that you can now use it to create template libraries.
We then get into a conversation about AI and voice technology around Amazon Alexa and other rival products. And we talk about how Bitcoin the Bitcoin mining network is using more power than the entire country of Argentina. There's a lot more tagged on towards the end as well. But I highly recommend the show to you.
I hope that you enjoy it this week in WordPress is brought to you by cloud ways. Cloudways is a managed cloud hosting platform that ensures simplicity, performance and security. It offers cloud service from five different cloud providers that you can manage through its intuitive platform. Some of the features include 24 seven support free migrations and dedicated firewalls.
Check it [email protected] and buy AB split test. Do you want to set up your AB split tests in record time? Like in a couple of minutes, use your existing pages and test anything against anything else? Buttons, images, headers, rows, anything. And the best part is it works with Elementor Beaver builder and the WordPress block editor.
You can check it out and get a free demo that AB split test.com. Hello. Hello everybody. Welcome back to another episode of this week in WordPress world number good grief, 103, and I'm joined as always by Paul. How are you today, Paul?
Paul Lacey: [00:02:22] Doing good. Thank you very much, Nathan. You're right.
Nathan Wrigley: [00:02:25] Yeah, I'm good.
You've got a nice background. There's a, there's been changes.
Paul Lacey: [00:02:30] A wool with two holes in it is definitely an improvement on desk time. Sorry.
Nathan Wrigley: [00:02:35] It's nice. It's really nice. It's nice to see you anyway. Nice to have you have your back. Paul is of course the cohost of the show. I don't know why I introduce him.
Really. Paul, you should be introducing me. I think you're doing a better job at reading. That next week
Paul Lacey: [00:02:51] I'll introduce you
Nathan Wrigley: [00:02:53] more. Yeah, a hundred percent of nothing is still
Paul Lacey: [00:02:57] nothing. Cool. I'm happy with that. Yeah. Brilliant.
Nathan Wrigley: [00:03:01] Today. We're also joined by bill Gates. How are you
Birgit Pauli-Haack: [00:03:03] doing big it I'm okay. I'm okay.
Thank you for for having me. Yeah. So it's a wonderful morning in Florida. Ah. Yes.
Nathan Wrigley: [00:03:15] I had forgotten that I had totally forgotten that you were in Florida. You've got the most impressive. You look very knowledgeable big it's background. For those of you that are listening is just one of it's like an academic's background is row upon row of intellectual looking books.
Paul's got a White's background and I've got children's books just there.
Birgit Pauli-Haack: [00:03:36] Yeah. My background is going to change because I'm going to move. Yeah, we're moving good. Just saying we are almost ready to sign the lease in a different town in Florida still, but the nice ones is going to be really. Yeah. Dominated by packing
Nathan Wrigley: [00:03:54] those books.
Maybe if we have you on at some point in the future. Yeah, there'll be the same shelves.
Paul Lacey: [00:04:02] Sorry, ask the question. Florida, is that what you call an open state? At the moment in terms of all the shops and restaurants and stuff, or is Florida closed, what's the situation
Birgit Pauli-Haack: [00:04:14] there? There's the governor said he's not gonna mandate mass, but some counties in some municipalities do, and we have been self isolating.
For almost a year, tomorrow is going to be a year. Dang sorry.