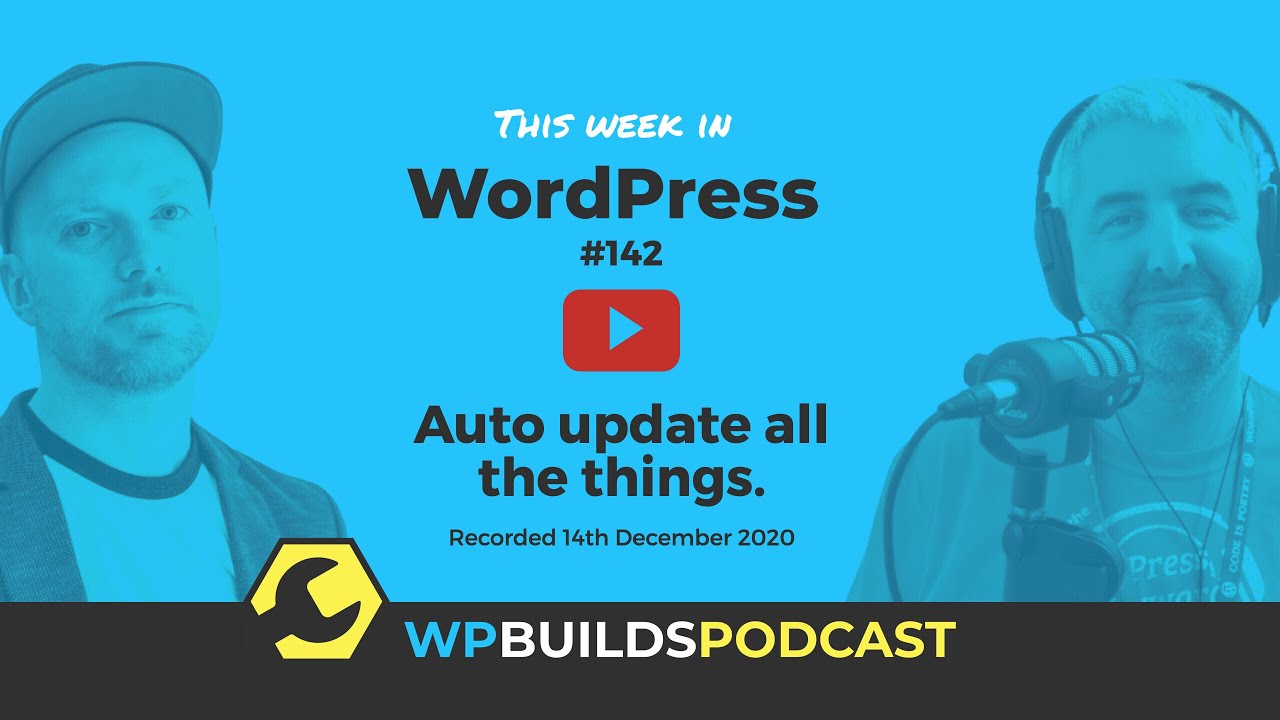 “Auto Update All The Things”

You can find the Newsletter here which has all the links mentioned in this episode:
https://news.wpbuilds.com/issues/142/

WordPress 5.6 Introduces a New Risk to Your Site: What to Do – Wordfence

so my take of this is that the, like anything, the industry moves, we change, what is the, front of where we're, where we're actually having differences at the time.
and I think it's quite an interesting way to go. I expect, I think this is just another nail. In the coffin of those that think that they can host their own stuff on their own servers. because that's just another one of like our, but you've got to host it with me because I've got I'm, I've installed Elementor for you or I've installed this and I'm sure it'd be the same with Devi.
I'm sure it'd be the same would be for builder that they will go around and people go, I don't care anymore because I'm not you're this no nine pounds 99 or one pound 99. WordPress hosting. He's the bit that actually in my own experience or I'm fail is the bit of the industry that needs to slowly move away so that people value what they're actually delivering and deliver it on high quality, infrastructure with the right support levels.
And I'm sure people, I've just gone and reduced my Christmas card intake by about 50% there. My feeling.
Nathan Wrigley: [01:08:10] Down from two way. Oh
Leo Mindel: [01:08:12] yeah. Yeah. I was already off yours. I
Nathan Wrigley: [01:08:16] spied in the docks and I can't now find it, but there's some restrictions. There's the usual one. You can imagine the competitive restrictions.
You're not allowed to install. There's a slew of rival WordPress page builders. So Beaver builder is not allowed element or is allowed obviously, Devi I think, was in the list. Oxygen was in the list, all the other ones that you'd imagine breezy and so on. And then there were a bunch of things that a bunch of normal products, I think like the site ground caching plugin, for some reason it was disallowed.
But, yeah, here it is
Leo Mindel: [01:08:47] fascinating. The next thing that will come out of it, there's, maybe they'll do a deal with another company in the same country, who builds, static websites that are literally just five minutes away from elemental and stuff.
Nathan Wrigley: [01:08:58] yeah. I'm sure you're not wrong,
Leo Mindel: [01:09:01] but yeah, the things that you've talked about there sites like flat site and static, and you can work out what your honor meant in there and do not want you to install certain plugins because they take
Paul Lacey: [01:09:13] control of all of that.
Nathan Wrigley: [01:09:15] Yeah. Yeah. Good point. And obviously if you're on the elemental cloud, they don't want you to experimenting with another page builder. So the price point, I think, yeah, go and have a look. It's 19 bucks. I think it was there's the page cloud elemental.com forward slash cloud. Yeah.
Paul Lacey: [01:09:30] Where is the price?
Because I think the price, like we saw the price in, we in the Facebook group, because someone had a screenshot of the landing page. Yeah, when there was a price, assuming they didn't just Photoshop that just for a joke, but the price doesn't seem to be there anymore.
Nathan Wrigley: [01:09:44] the, the, what, all I can say is last time I looked at the docs, there was lots less of them.
Now there's way more documentation. So it looks like it's a bit of a moving target and maybe they've taken down the pricing, so that, they can adapt it. maybe they've had some pushback and they're gonna lower it. Maybe they're going to make it higher. I don't know if 19 seems like the industry standard though.
Doesn't it for one site on a cloud platform. That seems to be that
Paul Lacey: [01:10:04] let's say if you re, if you took away wordpress.org, as an, as a concept, It just didn't exist, and you could only have hosted solutions. I'd go with this one. Do you know what I mean? This is because it would, because you can do all the things you can do with it, WordPress, but it's just pre hosted.
I would definitely choose this over Wix or something else. I think that some people will run into some trouble. we have some technical stuff, but if they're smart about this, they can lock down a lot of things for the default user and have everything turned off, turn off. By default and then you turn it back on.
but to be honest, anyone who I know who's used Wix and Squarespace and is a DIY they've run into a million problems as well. So I think, yeah. This seems like a good solution. I've also changed my mind on the image. Now. I think it's an awesome image and Welton to the designer.
Nathan Wrigley: [01:10:51] Is that because, I quite liked the other elements or image. Yeah.
Paul Lacey: [01:10:57] Agreed. Yeah. We've we are visual and also I was harsh on the image. I was just kidding.
Nathan Wrigley: [01:11:04] I like it. Anyway. Good luck to them.
Sabrina Zeidan: [01:11:08] I just wanted to mention that this all is coming from the person who .
Paul Lacey: [01:11:13] Yeah. Oh, yes. Yeah. So what I mean is, we've without a wordpress.org BeaverBuilder couldn't exist. So yeah, so I would have to use.
Elemental or Squarespace and definitely all Gary of elemental and that on that basis. No doubt about it, but thankfully wordpress.org exists and Beaver builder exists and I'm sticking with those.

Nathan Wrigley: [01:11:35] There's one more article that what I mentioned before we finished, but I'm not going to dwell on it for too long.
I'm just going to put it on the screen quickly and say, go and explore it for yourself. it's Sarah Gooding talking about WordPress community team discussing a return to in-person events. It just seems just right when this article came out, which was the 3rd of December, it felt like the curve was going in that direction.
I don't know what it's like, where you live, but it seems over the last 10 days since this article was initially published with, It's probably gone in the opposite direction. It feels like at the moment, but
Leo Mindel: [01:12:04] it, from my perspective, this is just crystal ball gazing. Although I think we have to be mindful that we will be going back and there and we do need to put together ideas and thoughts of what that's going to mean.
Nathan Wrigley: [01:12:19] But I think
Leo Mindel: [01:12:20] timing and areas is just so difficult. this is just not something that I think I'm just not even sure why this is. Part of the WordPress community team. Maybe someone else can tell me off for that.
Nathan Wrigley: [01:12:32] No. Nope. I guess like you said, crystal ball gazing somebody in this case, they were good in desiring, just publishing about the fact that the team would like to plan for it.
And I guess that's true, isn't it? Because the lead time on a word camp, let's say WordCamp Europe is massive. And, we're going to be at least another year away from that. And if we don't start planning for it as if it's going to really happen, Then it'll be two years because the planning work have started and all the Pete contributing team.
And what have you worked jumped on board anyway. Interesting piece. Go and check that out. I realized that we've totally run over time as we always did we one hour, 20 minutes instead of one hour, all I can say is thank you for those people who. Attended life. Thank you very much. If you want to watch this, you can go and find it [email protected]
there'll be a link in the main navigation at top. Go to archives. And then it's this week in WordPress. I think it is. I can't exactly remember, but we'll get you ping me somewhere on Twitter or something. I'll let you know. So deepest, thanks to Leo Mendell, the person. Thanks to Sabrina's done. And the Chris, thanks to Paul Lacey.
I really appreciate having you around. If you guys want to stick around. With me for a couple of minutes, we'll have a quick debrief. See how it all went from your perspective, but for the rest of you, who made comments? I appreciate your attendance. Thanks very much. Everybody have a good weekend.
Paul Lacey: [01:13:47] Bye-bye.