This Week in WordPress #154

This Week in WordPress #154 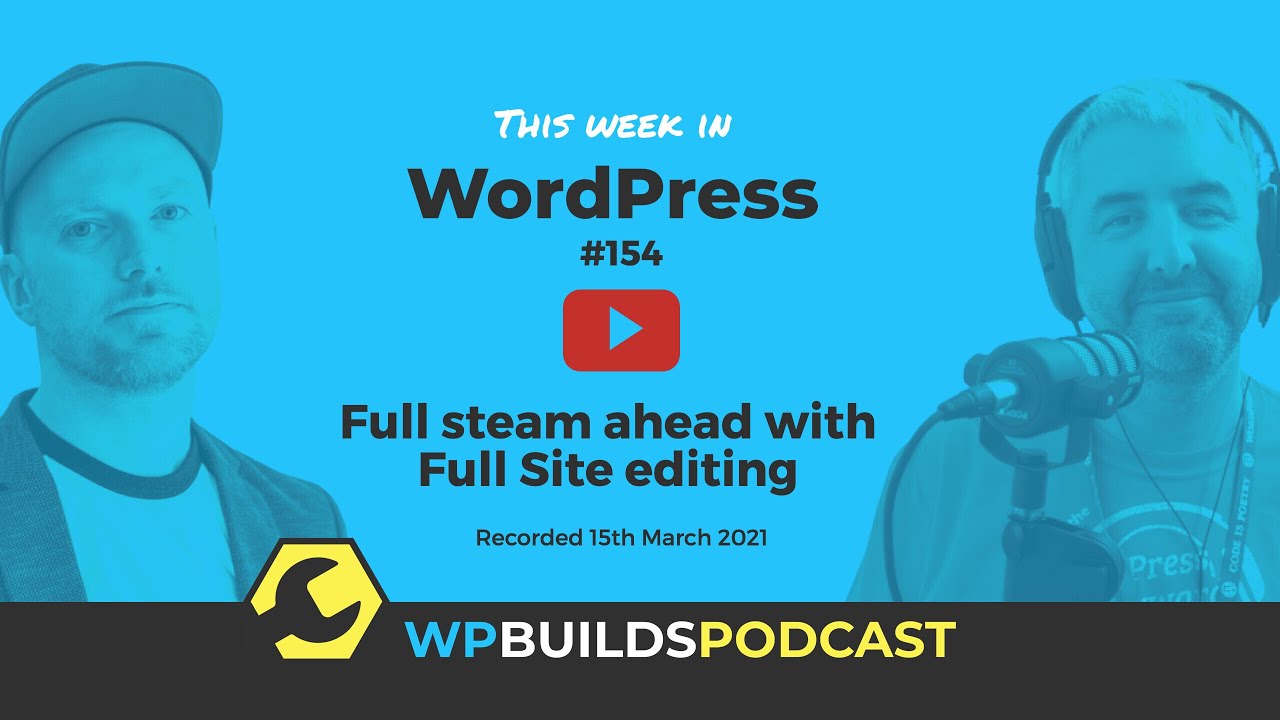 You can find the Newsletter here which has all the links mentioned in this episode:
https://news.wpbuilds.com/issues/154/

What’s new in 5.7 (Joe did a great video)
https://www.youtube.com/watch?v=62bGNnpOVhM
and there’s this article from iThemes with 21 nice new features to nerd out on!
https://ithemes.com/wordpress-5-7-top-21-features-improvements/

Tips on how to reduce the carbon emissions of your WordPress website
https://www.meetup.com/en-AU/wp-admin/events/276720147/
Might be worth pointing to this as well:
https://blog.jacklenox.com/2018/06/04/delivering-wordpress-in-7kb/

Joe Casabona: [00:05:53] There's a few things I ramble on about. Things I didn't expect to like the admin color scheme that has changed. It's been more simplified. It's a, WCAB a double a compliant. And I just think there's like a bunch of subtle changes there that make it look so much nicer.
And I was really pleased with that. And the thing with my what's new with WordPress videos is they're always my first look at it. I never go through and rehearse anything. I just want first impressions. And so I'll read a few of those great write-ups that come out before I'll check out the field guide and about 24 hours after we're the new version drops, my video will come out.
And so these are mostly my first impressions, but so I love the admin color scheme. It was my first time seeing it, I compared it to 5.6 and I just think that the subtle changes are really fantastic. The, I think the. My favorite change and this is going to sound super weird is I can change the font size for the block, just cause it's it, is it solved a problem?
I was having like five days prior where I was sizing up some of the paragraphs on my, about page and I wanted to size up the the list items too, but I couldn't without an extra CSS class or whatever. Just seeing that and all the block editor changes are really nice. The ability to drag and drop from the block from the block inserter is something I've tried to do multiple times before that.
And just the ability to do that now is great. I think perhaps the change that is going to be. The biggest impact, but like least intrusive is the HTTPS migration. As a matter of fact, if you watch that video, you'll see. I w when I change something during the edit, I'll say editor, Joe.
So like editor Joe coming in here to let you know that I spent like 20 minutes trying to figure out how to do the HTTPS migration before realizing it just happens. So I think that is going to be just a fantastic change. It's something that I would most of us probably relied on the same plugin for and it's nice that we will not need an extra plugin to do that now.
So those are the three things that, that I was most excited to showcase lazy loading I frames just like with lazy loading images. I think it was in 5.5 where that came out is going to be pretty impactful on performance. I think, especially because YouTube videos are loaded with eye frames.
And the fact that we're not loading those straight away is going to be really good. And this also wrapped up the three version jQuery migration. If you're going to jump on 5.7, make sure if you rely heavily on jQuery, which if you are not technically savvy, that might mean you have some slider somewhere or a big accordion somewhere that might that might use jQuery.
Just make sure you test that first. There's a jQuery update plugin in the repository, and then there's a J query migrate plugin in the repository that will help you do that.
Nathan Wrigley: [00:08:53] Thank you, Joe. So we, if we were to search for your YouTube channel, would we be looking for just YouTube Joe, Casa Banos, or has it got a different name?

Nathan Wrigley: [01:11:35] That's all I will. Yeah. Thank you. I've just posted the link on the on the screen. But if if you're listening to this after the fact, I will make sure that they're all in the show notes. Thank you for that. And it
Anne McCarthy: [01:11:47] helps just real quick. My username in Slack is at an Zazu, a N E Z U. And I welcome pinks anytime.
So please don't be shy.
Nathan Wrigley: [01:11:57] Thank you. Thank you so much. And Joe, anything from you?
Joe Casabona: [01:12:01] In my newsletter this week, I wrote about my thoughts on time versus money. It's been a big in my mind lately because or the forefront of my mind lately, because I just launched a new community and I did it on circle instead of using something like BB press and buddy press.
And part of the reason was I was trying to figure out what's the best way to spend my time. Should I spend my time? Should I spend 40 hours building a BB press and buddy press in such a way that gets it to the way I like it to look and the way I want it to work, or can I just pay 40 bucks a month for circle set up a Zapier to send new WordPress users over there.
And it's just, it's I think it's a conversation that has more, no code, low code tools come out with people in, especially the WordPress community or people who are very own your own platform. Me are going to need to think about. So I had those thoughts in my newsletter and I just, it's something I've been thinking about a lot lately.
Where do you say I want to own my own platform versus what's a tool that will at least let me export that data when I'm sick of that tool. Yeah.
Nathan Wrigley: [01:13:00] Or when it closes down or something like that, just out of interest, I've never heard of circle. It that's like a equivalent in functionality to something like BB presses it.
Joe Casabona: [01:13:09] Yes. It's circle dot. So it's a lot I think. Peep board is another word, press plug. And I might've messed that keep so as well as the name of that. But yeah it's a community. You can create spaces for people to hang out and post in. It's it's like a mix between a buddy precedent, BB press, where it's bulletin boards and people can chat and you can give access to people based on certain criteria.
So I have a community for each of my courses. I have a community for my podcast membership, and then I have an open community for anybody who just wants to listen to the public episodes and comment on them. Again, I was setting, I was trying to set all of this up in, in BB press and I just didn't, I couldn't get it to work the way I wanted it to, within the allotted time I had set for myself.
And again, with my wife being a nurse, I'm half a half-time stay at home dad when she goes to work and I need to be more judicious with my time. And. Circle has allowed me to reclaim dozens of hours probably. Yeah. And then the other part of that is that if my community falls on its face in two months, I will, it would have cost me 80 bucks as opposed to 40 billable hours.

Nathan Wrigley: [01:14:17] Good point, Chris, using the comments, making the exact same point. Certainly it's great. Got a client. He loves it. He did exactly what you did looked at body press went for circle in the exact same way. Oh, cool. And where can we find you?
Joe Casabona: [01:14:28] Joe, you can find me [email protected]
It'll tell you exactly what I do over there and you'll, you can sign up for my newsletter, build something weekly.
Nathan Wrigley: [01:14:37] Very cool. Very cool. The the time has arrived where I'm going to say goodbye. We have this awkward thing every week where I get everybody to wave and then I click the stop button on stream yard, which has gotten it's literally, it's a, I don't know what it is.
It's some random amount of time between one and eight seconds and the video stopped. I'm going to say goodbye. I'm going to start waving and but yeah. Do jazz hands. Thanks everybody. Thanks so much, everybody. Bye.